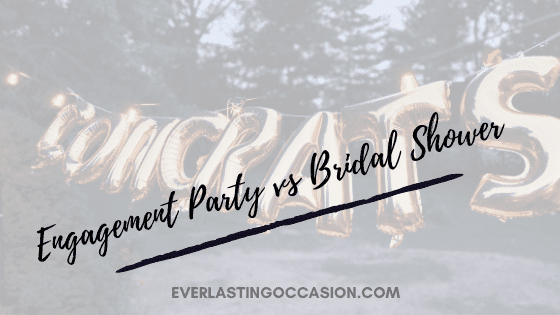 The time between the engagement and the actual wedding is a lot of fun. But it can also be a little overwhelming. One of the biggest questions a newly engaged couple will have is, do we have both an engagement party and a bridal shower? And if we do, what are the differences. Here is what you need to know.

So, what are the differences between an engagement party and a bridal shower? Traditionally speaking, an engagement party celebrates the couple, whereas the bridal shower is a party for the bride-to-be. The attendees are thus very different. However, these celebrations do share similarities. They are both properly planned family-based events that occur in the months preceding the wedding.

Celebratory events before the wedding are a lot of fun.

But there is quite a bit that goes into them, and quite a bit of planning and organization required!

So, let’s get into the differences and similarities between these two popular celebratory events.

This way, if you should throw one or the other (or both), you will know exactly what to expect.

What Is An Engagement Party?

An engagement party is a celebratory party that involves both the bride and the groom. It’s the event that kicks everything off and typically comes first. Both friends and family are usually in attendance.

You’ve just got engaged, and your phone is ringing off the hook with congratulations and “do-tell” questions.

There are some standard traditions and etiquettes that have long been followed when throwing an engagement party.

Having said that, we are always free to make it our own and ruffle a few feathers along the way.

When Does It Happen?

There isn’t a specific date that says when a bride-to-be and her groom should throw the engagement party.

It is normal to throw one a few months after the engagement when the wedding planning starts. There are a few reasons for this.

Once getting engaged, it’s nice for the couple to take in the special moments to follow. It’s also good to let the rush and excitement die down a bit before planning any engagement and wedding celebrations.

This is because it may allow the couple to have any serious conversations they may have not already had before engagement.

The engagement party should be the first event because it will give a chance for your friends and family to mix in a more casual setting before the actual wedding.

This can be an excellent opportunity for in-laws to get to know each other before the wedding planning starts.

We can consider the engagement party like an opening ceremony.

The invitation list has changed somewhat over the years.

Weddings used to be more like an order of events that nearly everyone was invited to – sort of like a year-long celebration.

However, now it is being treated differently where some people may make sense to be invited to this event while others go to another.

Engagement parties are no different.

In this case, if you are having a large wedding of 200 people, maybe only 100 of those people are invited to the engagement party.

Not anymore: While it is still widely accepted that you should not invite someone to your engagement party and not invite them to your wedding, there are a few exceptions.

With weddings that require families and friends to fly, an engagement party is starting to serve as an opportunity for those who may not be able to make a destination wedding.

What Is A Bridal Shower?

A bridal shower is a party that is specifically held to honor the bride-to-be.

While customary traditions are changing, the bridal shower is usually a time for all the girls to get together and sip pretty pink drinks and gossip with the bride.

Of course, we can’t forget about the fun bridal shower games as well.

While this has been the norm for quite some time, bridal showers have evolved to cater to the couple in some instances rather than just the bride.

Let’s get into this.

When Does It Happen?

Just like some of the other events that may happen between the engagement and the wedding, there is no exact time that a bridal shower must occur in order for it to qualify as one.

By the nature of the party, there is such a thing as good timing.

This event is traditionally a little bit later in the order of things.

Anytime around three weeks to three months before the wedding is a good time.

This is because the bridal shower is one of the last events before the big day.

The bridal shower will also depend on the event’s extensiveness and how much planning and scheduling will go into it.

If it is a catered event at a specific location, it may take some time for the caterer and location to match up on a somewhat close date to the wedding.

This ultimately depends on whether you have a traditional bridal shower or having what is now referred to as a “Jack and Jill” shower.

A bridal shower is primarily a female party, whereas the Jack and Jill event is a shower in honor of the couple and not just the bride.

Traditionally speaking, a bridal shower has an all-female guest list.

This will include the bridal party, close friends, and family.

The in-laws are always invited, and even cousins and close aunts will be there too.

Jack and Jill: technically, the gifts at the bridal shower are for the couple. This inspired couples to forgo bridal showers altogether and have a shower that focuses on the couple rather than just the bride.

In this case, all immediate family on both sides, wedding party, and close friends are invited to celebrate.

How Are Engagement Parties and Bridal Showers Similar?

While these two parties are vastly different, they are going to have similar elements.

That’s why it can be important during the planning process to differentiate these similarities as much as possible, so you aren’t throwing the same party twice.

The party is similar in the way that your closest family and friends will be there.

It will be an opportunity to celebrate the opening and closing ceremonies of the time between the engagement and wedding.

You may see speeches at both but possibly slightly different as one is the start of the engagement, and one is approaching the wedding.

Both parties, which will have different intentions, will take a planning element to it.

A lot of times at both, you will see a cocktail hour followed by a meal and dessert.

In some cases, both of the parties will offer games for people to participate in and act as icebreakers.

How Are Engagement Parties and Bridal Showers Different?

While there are a few similarities between engagement parties and bridal showers, there are quite a lot of differences that separate them.

To understand how these parties are not the same, we must think about:

A bridal shower or a Jack and Jill shower is more of a celebration of a couple starting a new home together.

This usually involves people sending gifts for their home, either that is thought on their own or through a registry.

An engagement party is more of a social event that does not include gifts for the most part.

As noted, because of the intention, ultimately, the timing is different.

The engagement party is going to happen within the first few months of getting engaged.

The bridal shower will happen a lot closer to the wedding as one of the last events.

Not always, but in general, the bridal shower lists are going to be more intimate than your engagement party.

It may be limited to your closest friends and family, whereas your engagement party may include many more people that won’t attend your shower.

While it is always going to be best to throw a party how and when you want to, it can be financially incentivized to make sure the parties are different.

Sometimes brides and their grooms can get overwhelmed on who and who not to invite to a particular event. That’s why it’s great to keep one more intimate than the other.

You don’t need to feel bad about this because this is a two-way street.

Those who are not as close to you may not want to feel obligated to come to the shower and give you a gift before the big day.

That’s why trying to keep the intention of both the engagement party and bridal shower is a great idea.