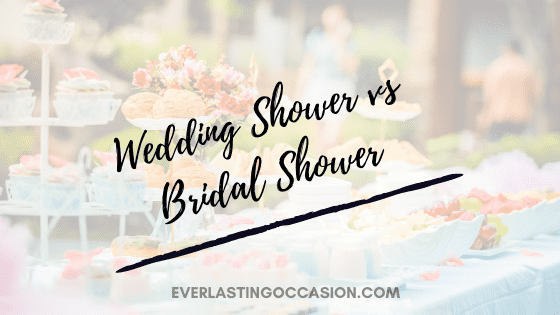 Wedding showers and bridal showers usually happen shortly before a wedding ceremony. This is another exciting mini-celebration that the bride and groom may decide to throw before they tie the knot. But what one should you have and what are the differences between the two? In preparation for my own celebration, I spent some time researching these two events and would like to share all that I found here today.

Couples usually choose to organize one or the other, but never both.

It is against the custom to have a wedding shower and a bridal shower and quite frankly, the couple may not have the energy or the finance to organize two parties.

Then, of course, there is your bridal party to think about too.

It’s unfair to expect them to attend this similar event twice, especially when you consider the fact that both involve gifts!

And while we are on the topic of gifts; if you are planning to have one of the celebrations, consider setting up a Wedding Gift Registry on Amazon.

This will help you to document your desired items, and help your bridal party/wedding guests know what to buy you, what already has been purchased and it will be effortless due to the number of gifts available on the platform.

It keeps it all in one place and prevents a lot of challenging conversations!

Let us now take a closer look at these two different types of celebrations, what they are, how they came about, and everything you need to know about what to expect with either one.

We will be covering such questions as who plans either a wedding shower or bridal shower when to have one and what happens at either celebration.

So, be sure to keep on reading to get all the information you need; whether you are being invited or holding your own!

What Is A Wedding Shower?

A wedding shower is a party given by the bride and groom before their official wedding ceremony.

Its purpose is to primarily receive gifts, mainly oriented towards the bride. Sometimes, however, these gifts are to be for the couple.

At a wedding shower, both men and women can be invited and attend.

What Is A Bridal Shower?

A bridal shower is a gift-giving party held for the bride-to-be in anticipation of her wedding.

It is attended only by women – that usually involves the women closest to the bride in her life – her mother, her grandmother, sister, and best girlfriends.

Of course, she can invite any woman she chooses.

The party should be organized shortly before the wedding. The latest time that is good to do it is no later than three weeks before the ceremony.

A bridal shower requires some organization and preparation itself, such as choosing a venue, preparing catering, and decoration, and should not be left until the very last moment.

If thrown too close to the ceremony, this may add additional organizational stress for the bride and her party.

How Did These Celebrations Start?

The tradition of wedding and bridal showers is believed to have started from early dowry practices. A dowry is a transfer of parental property or money at a marriage of a daughter. The dowry is wealth transferred from the bride’s side to her new family.

In cases when the bride came from a poor family or the father refused to give the dowry, friends of the bride would gather together and bring gifts and any material help to ensure the wedding will happen.

The gifts brought by the friends aim to compensate for the lack of dowry and allow the bride to marry the love of her life.

That is why many couples nowadays choose to have a bridal shower instead of a wedding shower, so only women will be allowed to attend.

It comes from the old dowry-giving tradition from the bride’s side.

Nowadays, of course, this party is more about having fun and bringing a gift that is more of a nice gesture or something the bride really wants and not so much about ‘saving’ the wedding ceremony.

Usually, the couple decides together which kind of shower to choose.

Both events are never held though, it is either one or the other.

Another difference could be whether the couple decides if the groom should attend the wedding shower/bridal shower.

If it is a bridal shower, it is usually kept between the women and women-only attendance.

If they throw a wedding shower where both men and women are welcome, then the groom is more than anticipated to attend.

Also, if the event is a wedding shower, naturally the number of guests may turn out higher.

In this case, a bigger location may have to be considered, more catering provided and generally, all details may have to be ‘more’ in comparison to organizing a bridal shower only.

What Is The Purpose Of A Wedding Shower Or Bridal Shower?

The purpose of a wedding shower or a bridal shower is to…receive gifts! These gifts should be things that the couple will be able to use together in the future – such as home appliances or home decoration but can be directed towards the bride only.

After all, she is the center of attention until the very end of the wedding ceremony.

Some people nowadays may think that showers are outdated but even so many couples choose to organize them.

Also, this is a very nice way to get people that are closest to the couple together before the ceremony.

Who Plans A Wedding Shower Or Bridal Shower?

Traditionally, a shower is hosted by the maid of honor, close friends, bridal attendants, or the bridesmaids.

Regardless of who is hosting, make sure there is clear communication and coordination between everyone so people don’t end up organizing two separate showers.

Nowadays anyone who wants can organize a shower. It can be the couple that plans their wedding shower or it can be the bride only if they decide to give a bridal shower with the bride’s closest friends only. This is an agreement between the couple and all details are up to them!

Many couples opt for setting up a registry from which guests can choose what to buy them.

The couple decides what they want, includes the items in the registry, and then the guests select what they would like to give them.

Some couples go a bit more unconventional and ask for money instead of things.

A reason for this could be the fact that people nowadays get married later and already have everything they need or simply want to choose their own gifts themselves.

When Should You Have A Wedding Shower Or Bridal Shower?

All timings are up to the couple but the typical timelines are as follows:

What Happens At A Wedding Shower Or Bridal Shower?

Couples nowadays are completely free to choose whatever activities they want for their shower. The customs are not as strict and the event can be from a luncheon to going out to a nightclub.

Traditionally, a wedding or a bridal shower is held during the day and it often still is.

Most brides prefer to have their celebration at home but some opt for restaurants and event halls. The food is usually light lunch or brunch, deserts, and maybe light alcoholic drinks.

A one-hour gift opening session is no longer required to be part of the party. The bride or the couple can choose how and when to open the gifts and if to open them at all.

Even so, it is nice to plan some activities to entertain your guests with. Some suitable examples could be:

Other cool activities options can be:

Another cool idea may be to turn the shower into a theme party such as Partying in the 20s; Fashion show; Future; France (or any country that the couple wishes to visit); Tea party; Disney-themed.

The aim of such a party is for the couple to receive gifts. It started at the times when a dowry was supposed to be given from the bride’s father to her new family.

If the father refused, then the bride’s friends would gather and give her presents to make sure she will be able to marry the love of her life!

Nowadays anyone can organize a shower but traditionally the event is held by the maid of honor, the bridesmaids, or a close family member.

Fun activities should be organized for the guests such as a theme party, games, a trip, or workshops.