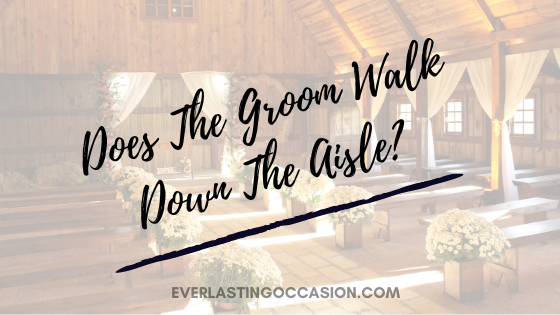 The guests have arrived, the decoration is impeccable and the suspense is building. It is time for the much awaited wedding ceremony! All eyes are traditionally set on the bride-her dress, hair, make-up, jewellery, her gracious walk down the aisle. Usually, she is accompanied by her father on her way to the altar. The bride is always the center of attention and the most awaited participant in a wedding ceremony.

While everyone focuses their attention and efforts on the bride, people tend to forget that the groom also has to somehow get to the altar! While the whole walk –down- the- aisle of the bride is a small but significant tradition in the wedding ceremony itself, not much is known about the groom. I decided to research into what typically happens and what can be expected of the main man.

So, does the groom walk down the aisle? The groom does walk down the aisle. However, how he walks and with whom may depend on the type of ceremony the couple is having, including any religious and cultural considerations. The most common choice is for the grandparents to be seated first, followed by the groom’s parents and the bride’s mother. After that the officiant leads the groom, the best man and groomsmen to the altar.

In Christian weddings the officiant leads the groom.  A marriage officiant is a person who officiates at a wedding ceremony. Weddings are officiated by a pastor, such as a priest or a vicar.

However, there are a few options for the groom and his closest relatives to proceed down the aisle and be seated. While there are general traditions, etiquette and customs, what will happen on your special day will of course, be ultimately down to your type of ceremony.

Let us now take a closer look at procession from the grooms perspective. We will be covering some of the most common questions, such as when, whom with and if any music will be playing during this time.

When Does The Groom Walk Down The Aisle?

The groom usually walks down the aisle once the mother of the bride has been seated and the wedding officiant has taken his place.

He will traditionally take his place at the head of the altar. Sometimes couples may choose for the groom to enter from the side of the venue.

Who Does The Groom Walk Down The Aisle With?

The groom can enter right after the wedding officiant, led by him, alone, or escorted by his parents.

Some families nowadays choose for the groom to be escorted by his parents, one on each side.

Once they walk down the aisle together, the parents take their seats at the front row, on the right.

Depending on the couple’s choice, the groom may walk down the aisle escorted by several people:

The key participants entering a wedding ceremony is called a procession. The officiant is honored the opening spot and is followed by the groom.

One option for the groom is to enter after him either walking down the aisle or more subtly from the side of the venue.

The groom can also choose to walk down the aisle with his parents on each side and then they sit at the front row on the right side of the aisle.

He can choose to walk down the aisle alone, as well.

A more subtle choice is also entering alone but from inside the venue itself. This is a very subtle and quiet way and he would not attract that much attention.

In any case, if he decides to walk down the aisle, he is led either by the wedding officiant or his parents.

Does The Groom Walk Down The Aisle To Music?

This depends entirely on the couple. The groom can choose to walk down the aisle to music.

Sometimes the couple chooses their favorite song, while others opt for more traditional and classical orchestral music played during the ceremony.

Whatever the couple chooses it is always fun, if the groom’s walk down the aisle is accompanied by music.

What Is The Remaining Order Of The Procession?

Once the mother of the bride takes her seat, this is a sure sign that the processional may begin. The order goes as follows:

1. The officiant is one of the most important people in a wedding. This is a pastor, a priest or a vicar and basically weds the couple officially in a religious ceremony. He is the first member of the processional to enter and after that the ceremony can begin in full swing. It is optional whether he enters from the aisle or more subtly from the side of the venue. This also determines if the groom will walk down the aisle or not as he can be led by the officiant if he choose so.

3. The third one following the groom is the best man. He usually enters alone, right behind the groom. Sometimes he can also act as the ring bearer.

4. The best man is followed by groomsmen, who enter either alone or in pairs. Their place is at the very front on the right side.

6. The bridesmaids are followed by the Maid of Honor and the Matron of Honor, if the couple chooses to have a Matron. The Maid of Honor is the most important bridesmaid and she is one of the last ones to enter before the bride. Her duty is also to make sure everything about the bride looks well – her dress, her veil, her hair. She stands at the very front, right next to the bride on the left side, and may hold the bride’s bouquet during the ceremony.

7. The flower girl and the ring bearer are usually very a young girl and a boy. Their appearance is a sign that the bride is about to show up. They usually enter together. The ring bearer may not necessarily carry real rings, if he is too young to be trusted. The flower girl carries a small basket with flower petals, most often roses, and scatters them around as she walks along the aisle. After that, the children are seated with their parents.

8. Finally, the culmination of the procession is the entrance of the bride and her father. He stands on her right side. After he gives her away at the altar, it is a tradition for him to remove the veil, kiss his daughter, give the bride’s bouquet to the maid of honor and then takes his place next to the bride’s mother. After that, the wedding ceremony is officially ready to begin!

Why Is It Nice For The Groom To Walk Down The Aisle?

Even though, many couples nowadays decide for the groom to walk down the aisle, either alone or accompanied, some still find this a bit outside the lines and prefer him to enter from the venue.

Let’s look at a couple of reasons why a groom walking down the aisle is cool!

He Deserves Some Spotlight

A wedding usually revolves around the bride. She attracts a lot more attention and is more interesting for the guests who anticipate her dress and her looks.

This leaves the groom a bit outside of the spotlight and he deserves to be acknowledged properly. It is his day, too! So walking down the aisle is a good opportunity for him to show off.

It Gives More Flare To The Processional

The processional is one of the most exciting parts of a ceremony.

The guests anticipate it and it is better to add as many people to it as possible to make it versatile and colorful!

The Grooms Parents Are Acknowledged

Escorting his son down the aisle is a good opportunity for the groom’s parents to be properly presented and acknowledged.

They may also remain a bit on the sidelines since the father of the bride escorts her and the ceremony cannot start before the bride’s mother has taken her seat.

The groom can walk down the aisle with his parents, which is a shows respect and recognition.

To conclude, the groom does walk down the aisle. However, this is a personal choice and it is completely up to the couple how to proceed.

The groom can walk down the aisle led by the wedding officiant, escorted by his parents or alone.

Alternatively, he can also enter from the side of the venue, right at the altar, and not walk the aisle at all.

However, walking down the aisle is good for him. Since most of the attention is on the bride, he can enjoy some spotlight; it gives some flare to the processional and shows respect and recognition to his parents, if he chooses to be escorted by them.

Other guides you may want to check out: