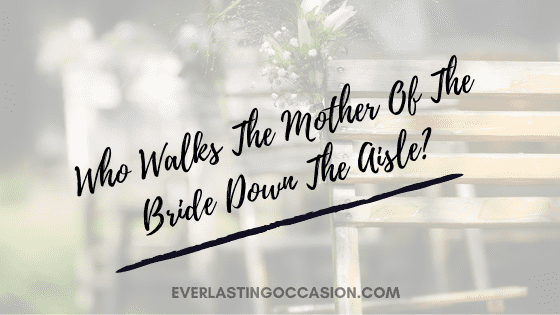 Arguably, one of the most iconic moments of a wedding, is when the bride or groom first walks down the aisle. Tradition dictates that it the father of the bride that walks her down the aisle towards wedded bliss. However, it is just as common these days for the bride and groom to make the decision together based on their particular family set up. I was wondering about this myself and it got me thinking about my own mother, and who she will walk down the aisle with on my big day.

It may be that your family set-up indicates a specific person who is perfect for this role. In blended families, it is not uncommon for the bride’s step-father to walk the mother of the bride down the aisle.

We have also attended more than one wedding whereby the mother of the bride has chosen to not walk down the aisle.

There is no hard and fast rule about whether or not the mother of the bride should walk down the aisle, or in fact who should walk with her.

We would recommend discussing your vision for your ceremony as bride and groom first before extending the discussion to the wider family.

If you – as the bride and groom – have particularly strong ideas or opinions as to who will walk the mother of the bride down the aisle – then that is what you should do!

Remember, it is your wedding day so if you have your heart set on something, make provision for it.

If you are open to suggestion from friends or family as to who should walk the mother of the bride down the aisle, make time to talk this over well in advance of the ceremony.

If not, chances are the best person for the honor will be someone they have a meaningful relationship with.

Perhaps a relative or a groomsman they have formed a friendship with?

Let us now take a closer look at the mother of the brides role in the ceremony; starting with whether they walk first. We will then look at what they should wear and if they should get ready with the bride.

Does The Mother Of The Bride Walk Down The Aisle First?

When it has been decided who is going to walk the mother of the bride down the aisle, it is a good idea to consider the order in which the bridal party will make their entrance to the ceremony.

Again, there are several different options when it comes to this and a few things to consider.

A traditional wedding processional begins with the entrance of the mother of the bride – signaling the start of marital proceedings.

Couples who may decide upon this traditional wedding processional may ask the mother of the bride to walk down the aisle alone, or accompanied by someone who maybe will be sat near to her during the ceremony.

Christian or Jewish ceremonies may dictate specific traditions to do with the order of the wedding processional.

It is not uncommon in a Christian Ceremony, for the bride’s mother to be seated, rather than processing down the aisle.

Whereas, in a Jewish ceremony, it is traditional for both parents to walk their daughter – the bride – down the aisle, meaning that the mother of the bride is one of the last people to enter the ceremony.

A recent trend in Weddings is for the mother of the bride to be one of the last people to enter the ceremony, just before the bride herself.

Where each family’s circumstance is different, the order and combination of wedding procession are likely to also differ.

If the mother of the bride is walking the bride down the aisle, then she too will be last to enter the ceremony.

Relationships will also have a part to play when the bride’s mother enters the ceremony. Chances are you will have a gut feeling – as the bride – about when you would like your mother to enter.

Personally, I would love nothing more than for my mother to be able to watch me walking down the aisle, I may ask her to be first in the procession or already be seated, I don’t think I’ve quite made my mind up yet.

Any decision you make will be the right decision for you as a couple. Your wedding day is about you and your partner, and chances are your families are thrilled to be involved.

What Color Should The Mother Of The Bride Wear?

If you are choosing for the mother of the bride to be a part of the wedding processional, you may need to consider the color of her outfit, to avoid any potential color clashes with the bridesmaids.

Tradition dictates that there is no specific color the mother of the bride should wear, although it is generally advised that she avoids white, ivory, or champagne tones and hues to avoid detracting from the bride herself.

Ensuring your mother of bride outfit compliments and goes with the dress color of the bridesmaids is traditional, however.

Most bridal boutiques that stock bridesmaid dresses will also carry a range of mother-of-the-bride outfits, so ensuring that the choice of outfits complements one another can be relatively easy.

The mother of the bride’s outfit should stand out – rather than blend in – with those of the bridesmaids and extended bridal party.

Perhaps a similar color but slightly deeper shade or introducing pattern or lace to the mother of the bride outfit is an appropriate way of doing this?

That being said, the mother of the bride’s outfit does not necessarily need to match the bridesmaid dresses, only compliment them.

Consider the colors in your wedding photos and whether or not the outfits complementing one another is something that is important to you.

If not, then arguably it doesn’t matter whether or not outfits go.

If this is important to you, however, ensure that as the bride, you give opinions and guidance about color selection for the mother of the bride outfit, as it is likely that you will have chosen the colors for the bridesmaid dresses.

Does The Mother Of The Bride Get Ready With The Bride?

On the wedding day morning, it is common for the mother of the bride to get ready with the bride herself and the bridal party.

Hairstylists will offer packages that often include the mother of the bride’s hairstyling too! The morning of any wedding day is a special time, filled with special memories.

That being said, it is totally up to the bride who is there as she prepares for her wedding.

It can be stressful on the morning of your wedding day, and anything you can do to minimize feelings of stress is recommended. This means to choose who you get ready with carefully!

It is down to you as a bride to make that decision.

Photographers will often offer pre-ceremony photos as part of the wedding package. A bride may wish to capture some photos of her and her mother prior to the ceremony.

A special moment that will become a memory to last a lifetime.

It is even quite common for the mother of the bride to be seated prior to the ceremony.

Whatever you choose for your big day, know that your mother will likely be proud and honored to be involved in any way she can.

Wondering who else walks who down the aisle? Then my following guides may be of help: 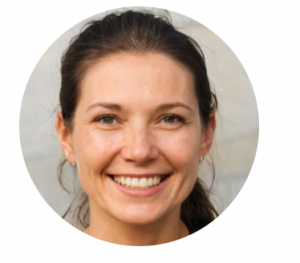