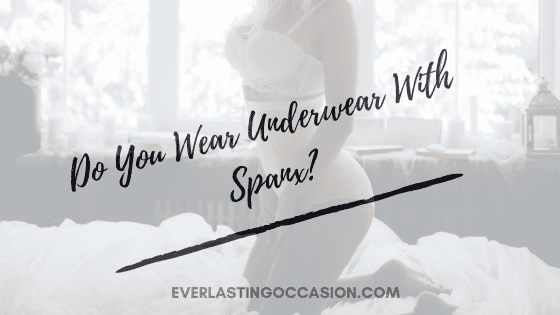 Spanx may have first been a big secret that women may have been embarrassed to talk about. But it was no secret that they do wonders for holding things in place. Since the Kardashians have notably come out and said that they use Spanx, it seems less taboo. But knowing how to wear them is another ordeal altogether.

You may be laughing because either you know the frustration of uneven lines and bunches of clothing in one area.

Or you are laughing because you think we are kidding.

Spanx should be simple, right?

Nope, let’s talk about why.

Can You Wear Underwear With Spanx?

Can is different than do. Yes, you can wear underwear with Spanx, and we are going to give you a few tips and tricks on how you can do it successfully.

While it is always encouraged to do what’s best for you and what feels best, there are some unspoken rules that you can follow to make the creases and thick lines stay to a minimum.

Keep in mind that Spanx and shapewear try to create more comfortable pieces for you to wear without underwear.

So they will provide extra lining, or maybe even built-in panties in some cases so that you don’t have to go through the effort yourself of finding a piece of underwear that works for you with your Spanx.

Are You Supposed to Wear Underwear With Spanx?

No, not really. Spanx is meant to create this overall smooth-looking shapewear that seems as if you are not wearing Spanx at all. Sometimes underwear can give this away by bunching up or creating a hard line in your shapewear that translates directly to your clothing.

Often Spanx will have a built-in panty liner or just a thicker section that is meant to provide comfort, so you don’t need to wear underwear with it at all.

How To Wear Underwear With Spanx

If you are someone who just simply feels more comfortable with their underwear on, here are some of the best things you can do to minimize any possibility of creating lines and creases.

Keep in mind that regular panties will simply have a hard time with Spanx.

If you really like to wear underwear wear your Spanx, then it is highly recommended that the type of underwear you wear is a thing.

The smaller the thong, the better it is for your Spanx. In most cases, the best type of thong you can get is a G-string.

Be careful those because sometimes G-strings will actually try to do things like bows on the side that can pop out. You want your thong to lay completely flat on the skin.

This way, you don’t have to worry about lines showing up if you are using the Spanx for a tight dress or pencil skirt or the sorts.

The best thongs are the ones like Lulu Lemon that are silky and barely noticeable.

These are a very thin layer of fabric that feels like you are hardly wearing anything at all for underwear.

This works well with Spanx because they are usually so thin that they don’t even create any lining whatsoever.

The only issue that can occur is they can bunch up or roll depending on how you put your clothes on.

Wearing a non-thong is really hard to pull off because of the lining issue.

However, some underwear companies are geniuses and are able to pull off a no wedge, no lining, silk underwear that doesn’t show up for whatever magical reason.

If you are most comfortable in this type of underwear, we highly recommend you find something similar to just described.

This is going to make your overall ensemble look much better.

Depending on if your Spanx is going to be sitting underneath, something like a white dress will depend on the color that you need to wear for underwear.

So if you have a white dress and nude Spanx, a black thong or underwear will likely show through.

In this situation, go ahead and wear the craziest print underwear you want.

Do You Put Spanx Over or Under Tights?

When Spanx are going to be worn with tights, there is a specific order that you should follow when one goes on over the other. The tights should be put on first, followed by the Spanx.

This is done for a few different reasons.

Should You Size Up Spanx?

Knowing the right size for Spanx can be really difficult. While we definitely want it to be formfitting to keep all the areas in place, we also don’t want to feel like we are wearing a corset and cannot breathe.

So, should you go a size up in Spanx? Let’s talk about the size chart.

The Spanx size chart will take into account your bust, waist, hip, etc., measurements because there are a number of different styles that you can choose from.

While you may not need to go a size up in Spanx, you definitely should not go a size down.

Some women think it’s a good idea to go a size down because they believe it will hold things in tighter.

Actually, all that will happen is that you will be in extreme discomfort that will only get worse with time.

Also, worse, it will be all for nothing.

The Spanx won’t wear the same way if it is squeezing the life out of you. It may start bunching up or pushing your skin up and out of the Spanx, creating a muffin top kind of feel.

This is why it is better to go with your actual sizes like what you wear for clothes every day since it will be literally going under those clothes.

Going a size up can also pose some potential issues.

If it is too loose, it simply can’t do its job.

Baggy Spanx will create lines and budges in places you don’t want.

Something that women should really keep in mind when they are wearing Spanx for the first time is that it is a new experience.

Naturally, things may feel a little weirder than normal.

Having said that, it may be worth it to try the Spanx without underwear a few times because this too can be a different experience that you just need to get used to.

Most stylists and even Spanx themselves will recommend not wearing underwear if you don’t have to.

This just helps the product and shapewear perform that much better.

When you put on underwear, naturally, there are noticeable creases, fold-overs, and bulges that can be really difficult to get rid of.

In some cases, you may get lucky and not have to worry about that.

But for skin-tight dresses, tops, and pencil skirts, it becomes an issue.

At the end of the day, it is always going to be what feels best for you.

When you feel your best, you look your best.

But when it comes to a functionality standpoint, opting for no undies or a thong is your best bet in the Spanx performing its magic.

And whether you decide to wear Spanx at your wedding or another special occasion, well that’s something you need to decide.