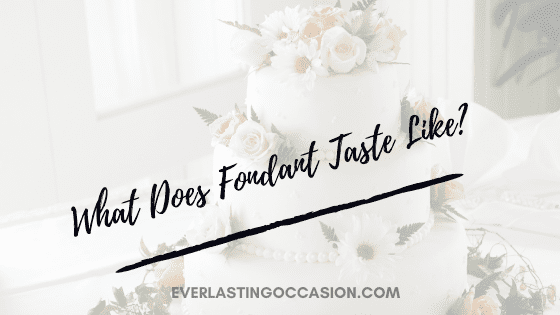 Fondant. The versatile icing used to decorate cakes and pastries, especially for elegant designs. It’s no surprise it is commonly used on wedding cakes. But what does fondant taste like? Is this something you can eat, or is it merely for show? Here is what you need to know.

So, what does fondant taste like? Fondant is sweet, although most people do not like how it tastes. This is because it provides very little flavor, is overly sweet, and has a rubbery, chewy texture. This is why decorators will often add a buttercream or ganache before any fondant in order to improve the flavor of the cake.

These are just some of the ways I’ve seen fondant described.

You get the idea here.

The pattern of the taste and texture emerges.

And it does not seem particularly nice.

Nevertheless, let us now take a closer look at this decorative icing to understand why it tastes as it does.

Fondant is a specific type of icing made from sugar, water, gelatin, vegetable fat (or a shortening), and glycerol.

Poured fondant is often used as a filling or coating. It’s creamy in consistency. Fondant fancies are one such example of cakes that use this type of icing.

Rolled fondant is the type that is commonly used for wedding cakes and other decorative designs.

It has a dough-like consistency and is rolled out like pastry before it is covered over the cake.

Are You Supposed To Eat The Fondant On A Cake?

You are not supposed to eat the fondant on a cake; it should be discarded before the cake is cut into slices.

That being said, most fondant will be entirely safe to eat and be edible. Unless of course, your baker advises you otherwise.

Some people who know they already like fondant will generally eat it.

Others who are unaware it is fondant or do not know what the fondant tastes like will probably eat it too.

However, most people who know that it is fondant will just look at it and peel it off.

Whether or not fondant tastes good will depend on individual preferences and the ingredients of the fondant.

Not all fondant is made from the same ingredients, and some bakers will even add some flavoring to improve the taste, such as vanilla extract.

For some, this can make all the difference.

For others, it makes it pleasant and edible.

And then there are many who will still not be able to enjoy it anyway.

There is also a type of marshmallow fondant, which is commonly used to decorate children’s cakes.

And this has been known to go down particularly well among this age and demographic.

Nevertheless, the majority of people tend to dislike fondant for being overly sweet and its texture.

It’s usually the waxy, oily consistency of fondant that is disliked the most.

What Tastes Better Fondant Or Buttercream?

The majority of people will tell you that they prefer the taste of buttercream over fondant. It is also smooth and spreadable in texture which most people prefer.

For this reason, buttercream is often used for children’s cakes or those where decoration is less prioritized.

That being said, there is no reason to go for one, or the other.

In fact, some cakes use a combination of both buttercream and fondant.

This provides the design elements while also improving the flavor for most palates.

Most people do not like the taste of fondant.

While it will, of course, depend on the person, how fresh the fondant is, who made it, if any additional flavorings were used, etc., for most people, it is the texture that just doesn’t seem to work for them.

But in truth, fondant is not really used for its flavoring.

Instead, this versatile icing is there primarily for the design.

It enables them to craft the perfect cake; exactly to the specifications that are desired.

That’s why it is often used on wedding cakes.

But whether the guests end up eating it.

Should they? Not necessarily.

Can they? If they wanted to.

It’s generally edible, after all.