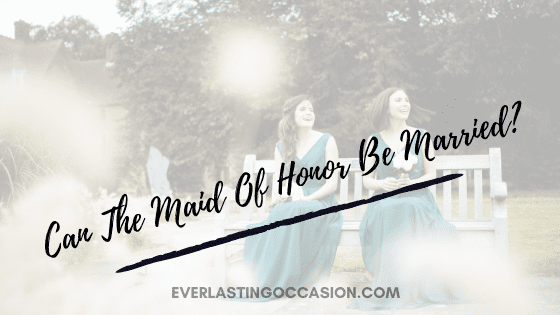 If you are looking at choosing a maid of honor, chances are you have a number of questions about whom they can or even should be. One common question is whether the maid of honor can be married. Is this possible or even accepted? In preparation for my own wedding, I spent some time researching the options and would like to share with you them her today.

The marital status of the maid/matron of honor does not carry the importance today than it did in previous times.

Besides a lot has changed, and we only have to look at the range of wedding traditions to see how archaic some of them really are.

Take the other bridesmaids as an example.

According to tradition, bridesmaids were supposed to be unmarried, young but still of marriageable age.

In the past, bridesmaids were a sign of the social status of the bride’s family. The more they were, the wealthier the family was.

They were perceived more as servants than friends or social companions.

They were present at the ceremony to organize, help and assist but were not friends.

Luckily, we live in much different times and now and the bride is free to choose from here closest, nearest and dearest friends.

The true can thankfully, be said for the “chief/principal bridesmaid”.

Let us now take a closer look at some of those other questions you may have, including whether your maid of honor should be married, whether you can have both a maid and matron of honor and the roles and responsibilities often undertaken by the person in this role.

Should The Maid Of Honor Be Married?

The maid of honor does not need to be married. Instead, the bride should be free to select the person they want and believe is most appropriate for the role.

Typically, the maid of honor/matron of honor is a female relative (such as a sister) or a very close friend.

Either way, they should be a special person to the bride and somebody whom she wants by her side.

They also need to be willing and able to participate in a range of both pre-wedding and wedding day activities to ensure the bride has the day of her dreams.

Can You Have A Maid Of Honor And A Matron Of Honor?

It is entirely possible to have both a maid and matron of honor.

In fact, this can work particularly well for larger weddings, or those with a larger bridal party.

Irregardless of marital status, both can help to support the bride and also help to coordinate and organize the rest of the bridesmaids.

It also works particularly well in a number of different circumstances.

Take for example a bride who has a younger sibling – they could take the position as a maid of honor, and an older, married best friend could be chosen to be a matron of honor.

In this way, and by having two “chief bridesmaids”, you can also split responsibilities.

Taking our example further, it can work even better if roles and responsibilities are split up by age. So, your younger maid of honor helping with the bridal shower, whereas your older Matron of Honor heading up and planning the bachelorette party.

Ultimately, if you have a maid and matron of honor; what is important is open communication and expectations that are set early on.

They can either work together, or they can take on tasks that have been fairly and appropriately divvied up. Better yet, you could give specific tasks that suit each person best.

Another benefit of having both a maid and matron of honor is when it comes to logistics. One is likely to live closer, and this can help enormously when it comes to tasks that need doing promptly.

Just be sure to delegate properly, and appropriately and fairly to prevent any arguments, resentment or tension!

Otherwise, consider that you do not have to have both a Maid Of Honor And A Matron Of Honor.

You can have one or the other.

Considerations For Having Both A Maid and Matron of Honor

If you do decide to opt for a maid and matron of honor; then there are a few additional considerations to take into account.

What Does The Maid Of Honor Do During The Wedding?

The maid of honor has a selection of both pre-wedding and wedding day activities.

Before the big day, they help to organize and support the pre-wedding events, including:

Yet on the wedding day itself, they play a very important and complimentary role to the bride.

A maid of honor is expected to:

As you can see, its quite an active role.

So despite the honor, the maid of honor does need to be organized, dependable and proactive.

Besides, they may also have to support with some post-wedding activities, like taking down decorations at the venue or returning all the dresses if they were hired.

The maid of honor can be married, or single. Either is perfectly acceptable and many brides choose either option.

In fact, if you hadn’t yet considered the it already; having both a maid and matron of honor could be a possibility for you and tends to work well for particular arrangements.

Nevertheless, when it comes to who you should choose for this role, think carefully.

It’s not the marital status that matters.

It’s who they are and what they mean to you.

You should share a special relationship with them and you should expect this to last long into the future.

Ultimately the choice is all yours, and the same goes for the rest of the bridal party like the bridesmaids and groomsmen.

Just be sure to talk to your partner before any decision is made!

Want to learn more about the Maid of Honor? My following guides may be of help: