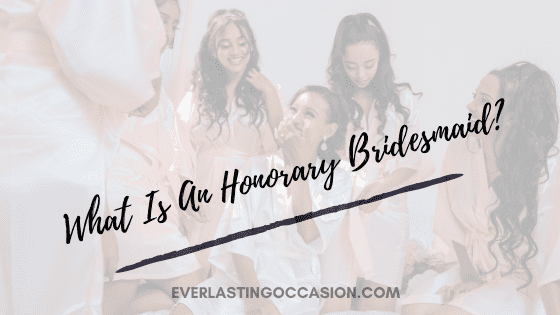 Have you seen or heard of the term honorary bridesmaid? Not sure what they are or what they do? Not to worry; I have pulled together all the information you need in one place.

Perhaps you are a bride planning your wedding and organizing your bridal party.

Maybe you are a bridesmaid who has been recently received her invite.

Or, you could even have been asked to be one!

Either way and whatever the reason you landed here today, this is an often misunderstood role.

So, let’s get into the nitty-gritty of all that is involved.

An honorary bridesmaid is very much an extension to the rest of the bridal party. Often they are chosen as a means of including individuals, typically family members and friends, that would otherwise be left out.

Honorary bridesmaids are, therefore, a means of broadening the bridal party.

Equally, the role has been used as a means to include others who are incapable of attending the ceremony yet still want to be acknowledged and recognized by the bride. Such as in the wedding program, for instance.

So, honorary bridesmaids are different from your typical bridesmaid by design; they often do not share the same duties as the rest of the bridal party.

What Does An Honorary Bridesmaid Do?

The duties of an honorary bridesmaid will differ from wedding to wedding, bride to bride. They are ultimate, up to the discretion of the bride, her wishes, and the kind of wedding that she is having.

It can seem pretty ambiguous, but that’s the truth of the matter.

Some brides expect their honorary bridesmaids to:

But this is not set in stone.

Some of, all of, or none of the above duties may be expected.

Some honorary bridesmaids are not expected to play an active role altogether.

So, it comes strongly advised that brides discuss the role with their chosen honorary bridesmaids, and the communication is open and clear.

Expectations should be set in advance so that everyone knows where they stand.

How Many Honorary Bridesmaids Can You Have?

Of course, the exact number will depend on the wedding size and the duties expected of each.

Weddings that are several hundred in number will likely do better with more than less and vice versa.

Should You Have Honorary Bridemaids?

Whether a bride should have honorary bridesmaids is ultimately up to her and will depend on her context and wedding plans. They certainly do not work for everyone, they are not appropriate for every wedding, and sometimes they are not even necessary.

That being said, the role arose to meet a need.

That need being that brides wanted to show respect and appreciation for somebody important to them, but that may not necessarily be as involved in the same way the rest of the bridal party would be.

For instance, having honorary bridesmaids may be an option for you if you want to have a bridal party that consists of just family members.

That way, your honorary bridesmaids could be your close friends.

Alternatively, you could consider making somebody an honorary bridesmaid if they are close to you but not to the rest of the bridal party. Say a friend from another social group or period of your life.

Regardless of the reason, what is important is that you do not miss anyone out by having them.

If you do decide to have an honorary bridesmaid, you may want to consider having multiple—the reason why is below.

Is It Rude To Have Honorary Bridesmaids?

Having honorary bridesmaids can come across as rude if it is not approached and done thoughtfully and carefully. The purpose behind this role is to acknowledge somebody and ensure inclusion, rather than exclusion which can result if not handled appropriately.

An example of where it can come across as particularly rude is as follows.

Somebody who is expected, or is normally part of the social group with the rest of the bridesmaids, but is then made an honorary bridesmaid instead.

This will come across as rude and will feel very isolating for that individual.

Generally, it is best to keep the honorary bridesmaid title to those who are least expecting it, distant from the bridal party in some capacity, or who would personally prefer to be recognized but not part of the core bridal group.

Hopefully, this has cleared some things up for you.

By now, you should know what honorary bridesmaids are, what they tend to do, and how to include them to keep everyone happy.

But if you remember only one thing from this article, then let it be this.

The purpose of having honorary bridesmaids is inclusion.

It’s a role that was created to help people feel more part of your special day and show they are appreciated for the relationship you have with them.

Don’t tarnish this by treating it as the ‘substitute bridesmaid.’ That’s not the idea here, nor will it go down particularly well.

What Do Honorary Bridesmaids Wear?

Do You Get Your Honorary Bridesmaids A Gift?

Have other questions about what certain things are at a wedding? Then my following guides may be of help: