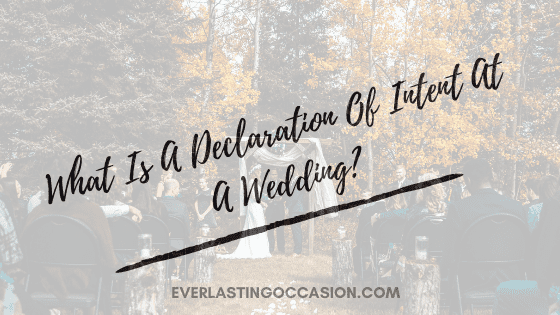 Weddings are a series of beautiful moments. And while we all like to put our own unique and personal twists on the day, all weddings follow a similar series of events to some extent. The declaration of intent is one such example. But what is it, and what does it look like? Here is what you need to know.

A lot happens during a wedding.

It’s no surprise we are not familiar with all these different terms and parts of the day.

Or, at the very least, we do not know the formal term that is often applied to such events.

Nevertheless, let us now take a closer look at this critical moment in much further detail.

This way, by the end, you’ll know exactly what is involved!

What Is A Declaration Of Intent In A Wedding Ceremony?

Quite literally, this is the “I do” and the “I will” answer from the couple when the wedding officiant asks if the couple wants to marry each other. It is the verbal part of the licensed marriage where a couple has declared their intent to be there for one another and marry each other till death do them apart.

Sometimes the declaration of intent is also interpreted or referred to as the commitment statement.

It is commonly mistaken for the vows but is not the same thing.

There are many different kinds of declaration of intent, from Religious to more traditional.

They can vary in length as well.

Let’s talk about some of the different ways to declare your intent to marry at the ceremony.

The most commonly used declaration of intent at a wedding is this one.

You’ve heard it before because of its popularity.

(Name) do you take (Name) to be your lawful wedded wife/husband? Do you promise to love and cherish her/him, in sickness and in health, for richer for poorer, for better for worse, and forsaking all others, keep yourself only unto her/him, for so long as you both shall live?

This declaration of intent ties whatever religion or faith you have into your passage.

Your religion will depend on the exact phrasing, and your officiant, if religious as well, may have a personal preference or a church preference.

Some churches and religious organizations may have a few to choose from.

Depending on how long your vows are (because they are different), you may just want to keep the declaration of intent short.

Sometimes long declarations can get trippy when repeating words and can cause the bride and groom to get tongue-tied.

After all, it is an emotional part of the ceremony.

Sometimes it’s important for a couple to stress to each other that their marriage is strong and they are there for the good time and the bad.

This is also considered to be sometimes a more traditional declaration of intent as we hear often:

“For sickness and health, for worse or better.”

This declaration of intent puts a focus on being free to be who you are as an individual in the relationship and come together as one.

This is important to some couples because of their fear of losing themselves to the marriage.

This is about respect and companionship throughout the marriage.

This is a more old-time feel declaration of independence and a play on words.

This focuses on witty words and sayings which sound somewhat traditional with a poetic feel.

Some couples who are getting married already have children together and find it incredibly important to bring their children into the declaration of intent.

This is especially true of stepchildren as the mother or father vows to protect and share the children in the marriage.

What Is The Purpose Of A Declaration Of Intent?

The purpose of the declaration of intent during the ceremony is to verbally commit the legal marriage as the papers are committed by writing. In a less romantic way of saying it, people have to verbally witness the couple committing to each other in order for it to be official.

This is different than the commitment of the vows. Let’s talk a little more about the two purposes so we can see how they differ.

What Is The Difference Between Declaration Of Intent And Vows

The declaration of intent is a verbal agreement that includes the officiant. In contrast, vows are a personal message directed at the partner during a ceremony. Statements of declaration are required for a marriage to be legally binding, whereas vows are optional.

Let us explore this a little further.

The purpose of the vows is to express a personal and emotional statement to your soon-to-be husband or wife in front of your family friends.

This can be funny or sentimental.

This is written by you and who you are exchanging vows with.

The vows typically aren’t shared until the actual wedding, sort of like a first look.

The Declaration of Intent

The declaration of intent is a lot more formal than the vows.

These are the repeat after me, whereas the vows have really nothing to do with the officiant.

The officiant just watches this moment.

The declaration of intent has the purpose of legally and verbally committing to marrying one another.

Sometimes this is taken in the place of vows in general.

Where Does The Declaration Of Intent Go In A Wedding?

The declaration of intent can technically go anywhere, but it wouldn’t make much sense to stick it in a random place. There are several events during a ceremony that usually take place in order. This is because it has a natural flow and makes the most sense.

Let’s talk about this order.

This where the wedding party walks down the aisle in a particular order.

First, the parents of the bridal party followed by any flower girls.

After this, the couples (one from each party) will walk down the aisle until finally, the bride starts to make their way down the aisle.

The music starts, and this is referred to as the processional.

The officiant will introduce the bride and groom to the party.

Maybe tell a quick story about why they are the officiant and how they personally know the company.

These may be meaningful poems chosen by either the officiant and or the bride and groom.

It may or may not contain religious aspects. They are symbolic of the beginning chapter and the new marriage between the couple.

They are usually words of encouragement.

Now is a great time to talk about the vows.

The officiant has done a lot of talking at this point.

It is a nice change and break for the audience and guests to hear from you.

This is when you can make it as personal or funny as you want.

You are speaking in front of your guests, but it is to your partner.

Now will be the official declaration of intent after you tell your partner how you feel.

This will be the repeating part of the wedding where you say I do.

You’ll have picked your declaration of intent already with your officiator, and so you will know what to say.

Now the officiant will pronounce you officially married and say you can kiss the bride!

This is a sweet moment because this is your first kiss as a married couple.

It has been a symbol and tradition for all weddings to seal the deal on the marriage.

Now the officiant will pronounce you husband and wife!

This when you will make your way back down the aisle and exit for photos.

The bride and groom lead the rest of the party out.

Do You Need A Declaration Of Intent?

Actually yes! You need to have a declaration of intent at a wedding regardless if you are getting married down at the town hall or you are having a big fancy wedding.

This is because this is the verbal commitment the officiant has to hear the couple agree.

The declaration of intent is arguably the most important part of a ceremony.

Besides, your officiator is your witness to the wedding and needs to hear it to legitimize your marriage.

So, you’re going to want to have one!

But thankfully, it doesn’t have to be so rigid.

For instance, the timing is not mandatory.

However, there is a natural flow of events through the ceremony that makes the most sense so, after the vows are advised.

That is, of course, if you have them.

Just remember, vows are optional, and many couples decide to skip them and just go with the declaration of intent – you can always do the same.

Or you can have longer vows.

Equally, you can choose the kind of declaration of intent you want.

And there are a couple of ways to do it.

Ultimately, it’s up to you.

For the most part.

The declaration is not optional. It’s mandatory.

It’s your official yes, even if how you say it is completely up to you!

Have other questions about what certain things are at a wedding? Then my following guides may be of help: