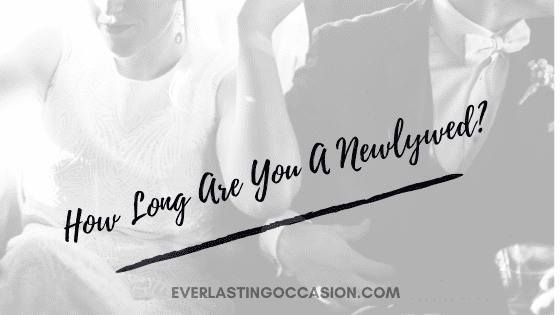 Getting married is an exciting time, especially in the immediate realm of time following the wedding. You’ll often see couples within this phase described as the ‘Newlyweds’, but how long does it last and how long can couples be called this? I spent some time researching to find out!

So, how long are you a newlywed? You are generally considered a newlywed for the first 6 months to one year following marriage. However, some people will still consider themselves a newlywed for up to 2-3 years, and the interpretation of the word is somewhat objective.

The newlywed phase is certainly a whirlwind.

From the range of emotions that you will feel; from elation to relief that it is all over, from the feeling of wedding planning withdrawal.

Nevertheless, this is a new chapter with your partner; where you will build the foundation for many years to come.

Let us now take a closer look into the meaning of the word, and its origins, before looking at other considerations; like when and when you’re not a bride!

What Does Newlywed Mean?

Newlywed is a noun that simply means a couple who ‘have recently entered into a marriage’.

So as you can see, the term itself is somewhat ambiguous. What does recently entail?

And this is the main definition of the term, taken from the Cambridge Dictionary.

So, I started to look across the different dictionaries to explore further.

Here is some further context that caught my eye, over at vocabulary.com:

The word comes from a popular early twentieth-century comic strip about characters named Mr. and Mrs. Newlywed called “The Newlyweds and Their Baby”.

So it’s the term has certainly been around for a while.

It’s a popular term used in popular culture, after all.

Which Is Correct Newlywed Or Newlyweds?

The term newlywed refers to a person who has recently got married, newlyweds refers to both individuals. So, both terms are correct, so long as they are used in the right context!

How Long Are You Considered A Bride?

You are generally considered a bride on the day of the wedding (and sometimes the night before).

Prior to this, and during the engagement, it is generally considered that you are a bride-to-be. So from the moment that you intend to get married onwards.

On the day after the wedding, this is when you will likely be referred to as a newlywed

The honeymoon is by far one of the most standout and memorable moments of the newlywed phase, and of being married in general.

And just like this vacation, being a newlywed does not last forever.

Although you may be able to stretch this out longer depending on your lifestyle and how you want to live it.

So, you should definitely enjoy it – while it lasts!