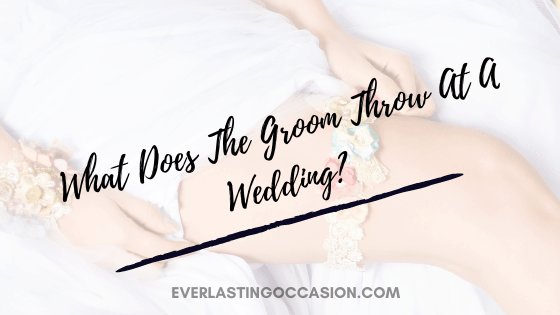 We all know that the bride throws her bouquet. It’s a monumental moment that gets a lot of attention. Besides, single ladies want to catch it for good luck. Or so the omen says. But what about the groom? Does he throw anything, and if so, what? This is what you will want to know.

So, what does the groom throw at a wedding? Traditionally, grooms have thrown their bride’s garter back towards single male guests. However, in more recent times, this tradition is not always followed. Grooms nowadays have been known to throw something else (like a sports ball) or to forgo this event altogether. Equally, some grooms will throw a secondary garter instead.

At the end of the day, the throwing of the garter is entirely optional.

It ultimately depends on the bride and the groom.

And there is a reason why this tradition is changing.

Besides, in some cultures (like in Northern America), part of the tradition is for the groom to remove the garter with their teeth (in front of the guests) before the toss!

Whether a couple still wants to do this is their prerogative, but it’s no surprise that there is a modern take and twist on this particular wedding event.

But what actually is a garter – why the toss to begin with, and what are some alternatives grooms can consider.

What Is A Wedding Garter?

A wedding garter is a band of fabric and a traditional piece of bridal lingerie. It is worn under the wedding dress by the bride and is a band that is placed around the upper leg.

Wedding garters are not worn by every bride at every wedding, however.

It does depend on the culture and views on the traditional wedding customs.

That being said, garters have been worn by brides for centuries.

The origins of when and why they were first used range; from being a good luck omen for guests if they managed to rip it from the brides all the way through to a means of consummating the marriage after the ceremony.

Nevertheless, the garter is a popular piece of bridal lingerie.

Even if traditions are not followed, many brides still choose to wear one.

Even if the toss is not something that is ever going to happen.

And due to its significance, there are some stunning garters that are available for purchase.

If you look on Etsy, for instance, you’ll soon see some beautiful options and examples.

Besides, many brides like to keep them as an heirloom and reminder of their special day.

What Is The Point Of The Garter Toss?

The point of the garter toss has varied throughout time and culture. Initially, one purpose was to distract guests so the bride and groom could make a quick exit. More recently, it has been used as a means of getting the male guests to the dancefloor or giving the groom an equivalent moment to the bridal bouquet toss.

In the instances where a bride does not want to lose her garter, an extra, secondary garter purchased specifically for tossing by the groom has been used.

Nevertheless, despite what garter is thrown, this is now the privilege of the groom at the reception, should he decide he wants to do it.

What Does Catching The Garter Mean?

Catching the garter is supposed to bring you good luck. If you believe in the supposition, it can also mean that the catcher will likely be getting married next.

In many ways, it has the same meaning as catching the bridal bouquet.

What Can You Throw Instead Of A Garter?

The main alternatives to throwing the bride’s garter can include the groom throwing something along his personal interests (like a football, baseball) or having the groom throw his boutonniere.

Outside of this, the garter toss can be skipped altogether, or the groom can get involved with the bridal bouquet toss.

That is something that some couples opt for too.

The groom has traditionally thrown a garter.

But that doesn’t mean he should or has necessarily had to.

Ultimately it is up to him and his bride.

In fact, there are many options.

Whether it’s the real thing, a secondary garter, or something else entirely.

And there certainly can be advantages – from a memorable moment all the way through to an amazing photo opportunity.

But it is not without its risks either – embarrassment, injury, or loss of possession.

The same can be said for the bouquet toss too.

Ultimately, what is important here is the bride and groom are both comfortable and in agreement.

So do think about it – there’s no right or wrong answer, after all.