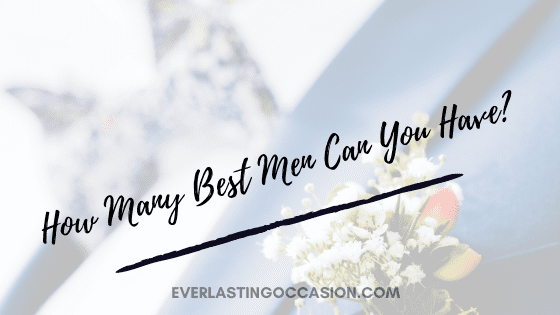 For a groom that cannot decide on whom to select as his best man, the thought of having several may spring to mind. But is it possible to have more than one best man and what would be involved if he were to? I spent some time researching the possibilities from an etiquette, tradition and logistical standpoint. I will be sharing what I found here today.

So, how many best men can you have? You can have as many best men as you like, although traditionally a groom has one best man. Some grooms will opt for two best men and it has been known for some grooms to have three. Either way, with more best men the honor gets diluted and duties and responsibilities will need to be shared and managed.

While its entirely possible to have more than one best man, the groom and the bride do need to think about it through more thoroughly.

This particular arrangement can cause issues, disagreements and problems if not properly planned and communicated. There are some duties that will often not want to be shared, or some that do not want to be passed up altogether.

That being said, some individuals may welcome the split responsibility; it does reduce the pressure somewhat and it can make for a more enjoyable day all round.

Ultimately it comes down to context, circumstances and personalities.

Let us now take a closer look at some of those other similarly related questions, and those answers that may make your decision all that bit easier.

So, be sure to keep on reading to the end if you are not currently sure of what to do and want to make a better rounded, more informed, decision.

Who Is Usually The Best Man?

The best man is usually one of the grooms relatives or closest friends. As such, it is common for a brother or an old school friend to be honored with the role.

However, some grooms opt for their father to be their best man, whereas others even look at the wider family and choose to have either a cousin or an uncle.

Either way, there are no rules for whom a groom decides to have.

For this reason, it is entirely possible to even have a female best man. Although they will typically go by another title such as the ‘best person’ or the ‘best woman’. While it is not very common, it an option that some grooms take up.

As to whom should be the best man however, is another topic entirely. Let us now look at who you should be looking to pick for this honor.

Who Should I Make My Best Man/Men?

Who you should make your best man, or men if you decide to have several, is not a decision that you take lightly. Besides, once you have asked it is not something you can take back.

Simply put, your best man should be someone whom you are very close to and can trust implicitly.

But beyond just your relationship, you should look for other qualities such as:

However, you need to consider the best mans duties both pre-wedding and on the wedding day itself. They have a number of roles and responsibilities that will ultimately be important for how you would like your day to go.

For example, just some of the main best man duties include:

As you can see, these are some important and somewhat defining moments of any wedding.

You should therefore consider whom seems right and appropriate for the role. One who will pick up and run with their duties and not leave it to the last minute or not take it seriously.

How Would Multiple Best Men Work?

We’ve briefly touched upon that it is up to the groom (and bride to an extent) on how many best men he would like to have.

However, if multiple best men were to be asked, how would this work exactly?

Well, it would simply mean either dividing up duties and responsibilities, or sharing them, among those selected.

In terms of sharing, this could mean that you have multiple best men give a speech. Perhaps they give the speech together or bounce back and to and from one another.

That being said there are duties that would need to be allocated.

Especially for the procession; whom would follow the bride up the aisle, whom would carry the ring and who would sign the wedding certificate (as only two witnesses are allowed to sign and the other will be the maid of honor)

As you can see, this could cause tension or animosity from one best man to another.

For this reason if you do decide to have more than best one, open communication is key.

You will need to consider respective personalities, and be willing and open to having these conversations with all taking up the role.

Do You Have To Pick A Best Man?

If deciding on who will be your best man, or the idea of several best men is not resonating with you, rest assured. You do not have to have a best man at all.

It is entirely possible to skip this tradition altogether.

However, you will need to consider their roles and responsibilities and whom will take them on in their absence.

For example, you may want to give a groomsmen ring-bearing duties, and be in charge of coordinating the bachelor party and wedding attire.

One thing to consider is that if you do choose to forgo a best man, it may disappoint a close family member or friend who may be expecting the role. Equally, you can miss out on those signature moments of a wedding, such as the speech and certain photos from the day.

But ultimately and at the end of the day, it is up the bride and groom to have the wedding they desire. If this means that a best man is not selected, or if there is not somebody whom appropriately fits the bill, so be it.

The best man is one of the most iconic persons for any wedding. From the pivotal part they play in the bachelor party to the entertaining speech they give for the groom.

It must be said that the tradition of having a best man has been retained, and for good reason.

Nevertheless, in recent years, it has become more popular and common for grooms to have more than one best man. And it seems to work particularly well for some people and in some contexts.

If the decision between two special people just cannot be made; it does offer an ideal opportunity to honor both and to give them a very important place on your big day.

Whether it is two best men or more, it can certainly work. Although it does require some upfront thought and planning.

By the same token, if you do not have or know of anyone you would like, or would be entirely suitable, then you can skip this tradition altogether.

What truly matters after all is said and done, is that the bride and groom plan and have the day that they want.

As to who will make up the bridal party will naturally be part of that, but it will not be the decisive factor in that.