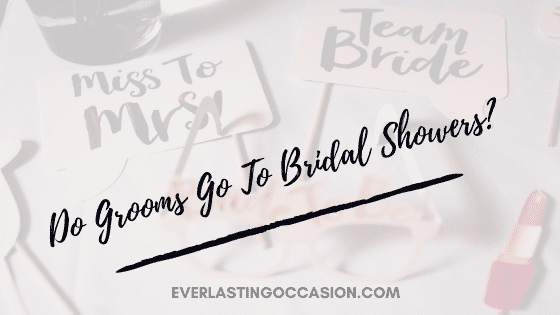 A bridal shower is a customary event and one that the bride will undoubtedly look forward to. It is often a more intimate gathering, but knowing exactly who should attend is not entirely obvious, especially when it comes to whether the groom should attend. Here is what you need to know.

So, does the groom go to the bridal shower? Traditionally, the groom does not attend the bridal shower. While not expected, it has been known for the groom to arrive at the end to say thank you for the gifts. Alternatively, some couples choose to throw a ‘Jack and Jill’ party instead, where both the bride and groom are in attendance.

While the gifts could be for the soon to be wed, a bridal shower has consistently about and to celebrate the bride.

And as such, the guest list is commonly made up exclusively of her women – those closest, whether that be family and friends.

But times are changing, and grooms are starting to show their faces.

Whether that be at the end or if a couple decides to change the event altogether (and more on that later).

Ultimately, nothing is set in stone – it comes down to preferences and personalities.

So, let’s talk about some of the usual etiquette associated with bridal showers and where things can be mixed up!

Is The Bridal Shower For The Bride and Groom?

The bridal shower is thrown for the bride, but the gifts are for the couple. This is the simplest way of putting it. Unless you are having a Jack and Jill type of bridal shower (we’ll get to that), then typically, this is a party in honor of the bride that is different than the bachelorette party.

A traditional bridal shower will be typically a women-only party, three weeks to three months before the wedding.

It is thrown in honor of the bride hence the name bridal shower. Having said that, times are changing, and the pink everything theme isn’t always the desired path.

If you do have a taste for tradition, then you can count on having a girly party with your bridal party, moms, aunts, grandmothers, in-laws, and those females who are closest to you.

Often games are played throughout a brunch or an afternoon snack.

If the groom is going to come to a traditional women-only bridal party, then he can come at the end for gifts.

This can be done in one of two ways.

If the bride is going to open gifts in front of their guests, then the groom can come and join her.

Or, the bride can have her moment opening the gifts, and the groom can come a few minutes before everyone starts to leave to say thank you.

This is the most common role for the groom during a traditional bridal party. The bride can keep her celebration but allow the groom to offer his appreciation and gratitude.

It is a polite gesture that can go a long way with the ladies.

Plus, the women always love seeing a soon-to-be-husband stepping up to the plate.

Do Guys Go To Bridal Showers?

Typically, guys do not attend bridal showers. This is traditionally an event for the bride and the closest females in her life. But having said that, times are changing and there are ways to put certain twists on this customary celebration.

Let’s get into the Jack and Jill bridal shower.

You may not have heard a lot about a Jack and Jill Wedding shower because they aren’t all that common in the U.S.

Well, they aren’t referred to as that name, and they originated more in Canada and England.

Nonetheless, this is the type of party that erases gender lines and throws a curveball into the mix.

Let’s Get into the specifics of what a Jack and Jill Wedding shower is and how the groom and his guys play a role in it.

The first thing we want to note is it is called a Jack and Jill Wedding Shower because it is no longer all about the bride and femineity.

Instead, it’s a party that is designed to celebrate both the bride and groom.

This really came to life when couples started really sharing the planning aspect of their weddings instead of leaving it all up to the bride and her maid of honor.

While this idea is a little more modern than it is traditional, there are still great traditional aspects of this wedding shower that get included.

It becomes more like an engagement party sort to speak but closer to the wedding.

Something that stayed with the theme of the bridal party is the icebreaker games that we all know and love when going to a shower.

This time around, though, they might be even more fun to mix in a group of groomsmen, with the bridal party, the in-laws, and our favorite aunts and uncles, to stir trouble up.

The reason these parties are so favorable is that in today’s day and age, the closest family friends and members may not know our significant other’s family and friends.

It gives everyone a chance to get acquainted before the big day and before the rest of the guest list is invited.

The spotlight that would normally be on the bride for the bridal shower is now on the couple.

The gifts at a bridal shower may be a few for the couple and a few for the bride but at these Jack and Jill parties, we see more couple gifts.

It is possible a few funny ones in there slip in depending on the crowd.

This is a great bonding moment as a couple as well because opening gifts that are meant to help with filling a new home or starting a life together is important to some couples.

Who Attends A Bridal Shower?

Bridal showers are typically attended by the closest people to the bride, primarily family and friends. Although, the groom’s family, mother, and other female relatives, may be invited too. Sometimes the groom will show his face at the end.

Of course, if a Jack and Jill shower is being held instead, then the guest list will extend to the groom’s family and friends, too, including males.

Either way, no matter whether you are having a traditional Bridal shower or a Jack and Jill style event, knowing exactly who to put on the guest list can be just as complicated and challenging as a wedding list.

Nevertheless, it’s a good rule of thumb to keep it to the closest people to you, which is primarily family and friends.

Let’s get into specifics.

That’s a pretty safe rule because if you have a huge wedding and aren’t very close with some of the females, they don’t need to be at the bridal shower.

However, it is good to note that anyone who is invited to the bridal shower should be invited to the wedding, especially if they are getting you gifts.

Regardless of whether it’s all girls or a mixed crowd, the people invited should be those who are closest to the bride and groom.

These are parents, siblings, close cousins, aunts, and uncles.

The bridal party and all the groomsmen will be invited too.

Then if you have someone who isn’t family but is like family, they typically would cut too.

The Bridal shower is meant to be a really fun and special event that kicks off the countdown to the wedding.

Something that a bride and or groom does not need to deal with when it comes to these parties is feeling bad for who is not invited.

If you are close with one cousin but not with another because of family drama, that’s OK!

Do Grooms Show Up At The End Of A Bridal Shower?

A groom can show up at the end of a traditional bridal shower but does not need to! It’s more common nowadays for the groom to show up because it signifies support and is, in all honesty, a nice thing to do after receiving gifts. Having said that, no one is going to fault the groom for staying away – it’s not expected.

If it is a Jack and Jill shower, the groom needs to be there for the whole time.

That’s because the focus is on the couple and no longer a party just for the bride.

Also, the groom’s family and friends would be there to support him.

What Does The Groom Wear To A Bridal Shower?

This completely depends on what the theme of the shower is.

Some grooms like to get ultra-fun with it, and if the bride is wearing a white sundress, he may show up in a pink suit in extreme cases to show support for his almost bride.

But if flashy isn’t his thing, then may some nice dress-up clothes to match the attire of the guests will do.

However, not all bridal showers are dressy and proper.

Some of them are more fun casual clothes.

The tradition of dressy typically comes from inviting grandmothers who will dress for this event, but as we mentioned, the party is for the bride, so if you want to wear jeans and a tee, by all means!

This is probably comfier for your groom as well!

Either Or Is OK

At the end of the day, no matter what you decide as far as the groom’s role in the bridal shower or Jack and Jill shower, it’s OK!

It’s your moment, and while it may be nice for a hello and goodbye at the end, in the past, it hasn’t been a major thing.

Some grooms like to let their bride soak up the wedding fun.