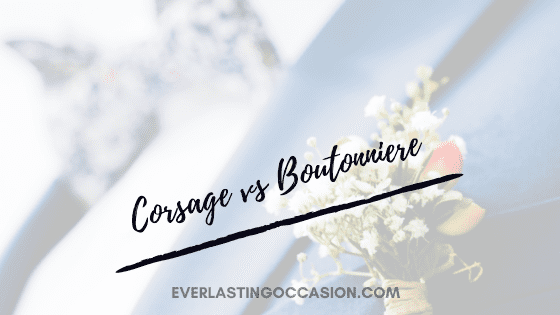 If you are busy planning for a special occasion, then you may wondering about the corsages and the boutonnieres. What is the difference; who wears what and are they actually necessarily? Amidst the preparation of my own wedding, I thought it would be a good idea to understand exactly what they were and their purpose. I will be sharing all that I found here today.

You may also have heard of boutonnieres referred to as buttonholes. They are the same thing, by the way.

And there are many different occasions where a corsage or boutonnieres may be worn; from proms all the way through to graduations.

Although, they are perhaps mostly known and associated with weddings. In fact, you will likely have seen them if you have ever taken a look at some old wedding photos.

Let us now take a closer look at each one in further detail, looking at how they are worn, by whom and the reason for them altogether.

What Is A Corsage?

A corsage is a small flower accessory that is worn by a female guest at a formal occasion. It is typically a singular flower, and either pinned to to dress or worn on the wrist via a band.

However, sometimes two or more flowers can make up a corsage, along with some added greenery.

There is no standard corsage flower or color; any they are available in a number of different styles. However, typical flowers used include orchids, daises, roses, carnations or poms.

This is primarily because these flowers are quite resistant and can withstand quite a range of different conditions without wilting!

Corsages are traditionally worn on the right; either the right side of the dress or the right wrist.

For a dress, they are commonly fixated to the shoulder strap. On the wrist, they come attached to a band that can be easily taken on or off.

What Is A Boutonniere?

A boutonniere, otherwise known as a buttonhole, is a small floral accessory worn by a male guest at a formal occasion. It is typically a single flower, two flowers or a bud, with an element of greenery.

Some more modern boutonnieres do not include flowers at all, and it has been known for them to be made from twigs or even herbs.

Either way, the boutonniere is commonly worn on the lapel of a suit jacket or a tuxedo, on the left hand side, directly above the heart.

Lapels are the folded flaps of cloth on the front of a jacket/tux; and they are most commonly found on formal clothing.

One often neglected aspect of choosing a boutonniere is the size. It should fit appropriately; too small and it does not look right, too big and it can fall off irregardless of how firmly attached and pinned it was.

Who Wears A Corsage At A Wedding?

Corsages are only worn by certain guests at a wedding; primarily female family members, close female friends and those in the female bridal party.

Below you will see the full list of whom commonly wear them:

If the wedding coordinator is a female, then they are commonly given a corsage to wear too.

Equally, it has been known for bridesmaids to wear corsages in addition (or instead of) carrying a bouquet.

Who Wears A Boutonniere At A Wedding?

Boutonnieres are only traditionally worn by the groom and certain guests at a wedding; primarily male family members and those other important male figures in the wedding.

Below you will see the full list of whom commonly wear them:

Sometimes, the ring bearer or ushers may also wear boutonnieres too.

Ultimately, boutonnieres are designed to distinguish the important men from the rest of the guests.

One other important thing to note is that the groom’s boutonniere should be different to everyone else.

Usually, it will be the same flower used in the brides bouquet, but it should still fit with the rest of the grooms attire.

What’s The Point Of Corsages And Boutonnieres?

Corsages and boutonnieres are primarily worn to distinguish family members and important people from the rest of the guests.

They serve as a means of distinguishing but they also are seen as a way to add style and color to wedding atire.

That being said, this is not the original purpose behind them. In fact, this is merely the modern interpretation.

In fact, both corsages and boutonnieres actually had an interesting purpose.

They date back to Ancient Greece, but have been used for different reasons depending on the century.

They were initially worn by the Greeks to keep evil sprits away, but in the 17th and 18th Century were used to keep odors and disease at bay.

In the 19th Century, they became part of dating etiquette and presented as a means of impressing a date and their family members.

While these purposes no longer hold true, the tradition to corsages and boutonniere still lives on.

Are Corsages And Boutonnieres Necessary For Wedding?

Corsages and boutonnieres are not necessary for a wedding, although they are relatively common and the traditional thing to do.

Nowadays, it is very much up to the bridal couple as to whether they want them to be worn and the style selected.

That being said, it does come recommended that they both align with the theme of the wedding and the venue.

It is also advisable to seek the preferences and desires of those who will be wearing them.

If corsages and boutonnieres are to be worn, they should be coordinated in some way. They do not necessarily have to match, but ensuring the colors blend together and do not clash comes strongly advised.

Otherwise it will stick out and show in the photos, while also not looking right on the day itself.

They are worn on different sides; right for corsages, left for men.

Traditionally, it is the grooms family whom pays for both of them, along with the bridal bouquets. Although, this should not be expected and will differ by context.

If you are looking to get married and are not sure whether you want to have them on your special day, remember this:

Corsages and Boutonnieres are not mandatory for a wedding, just as the wedding flowers are not.

At the end of the day it all comes down to personal preferences, taste and choice.

If its your wedding, you have the final say.

You can either follow this interesting tradition or make the day your own!

Corsages may be considered outdated in the sense that they are a long-standing tradition. Roughly dating back to Ancient Greek times. Whilst their origins might be considered macabre (their original intention was to prevent odors, disease, and death), a floral corsage is now considered to be a symbol of affection and is typically gifted. However, they can be a great way to tie in wedding décor with the bridal party as most couples will choose to have similar flowers and colors which reflect the bridal bouquet. Many florists will often offer corsages as part of the wedding packages. As such, they are still commonly worn and many people still opt to use them. Either way, the decision is up to the bridal couple or those organizing the occasion.

Can A Bride Wear A Corsage?

A bride can wear a corsage, although it is somewhat uncommon. Instead, the bride will often carry a bouquet along with her fellow bridesmaids. If a bride were to opt for a corsage, then it would make more sense to wear it on her wrist.

Does the Mother Of The Groom Wear A Corsage?

The mother of the groom does traditionally wear a corsage. This can either be a pinned corsage to the dress or a corsage worn on the wrist. If the bridal couple has no strong preferences, it is advised to ask both of the mothers what they would like.