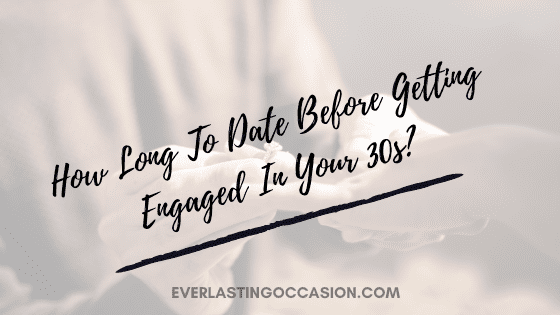 Dating in your 30s can feel pressured. Whether you are just having a good time or seeking a life partner and hoping to marry, there are certain things to consider at the first stage of getting to know someone. If you are seeking a long-term partner and want to get married, it is always a good idea to have that conversation early on in a potential relationship. It is only natural to have some questions surrounding marriage and dating, including how long to date.

So, how long to date before getting engaged in your 30s? You can get engaged after any length of time spent dating, as long as you feel comfortable with the person, share love and support between you, and have similar hopes and dreams for the future. Ultimately, the length of time dating is irrelevant to when you should get married – it could be months, it could be years – you will know if it feels right.

Whether you are in your 30s or not, having in mind whether marriage is something you want for yourself is key before committing to a serious relationship.

Perhaps friends and family of a similar age are moving forward in their relationships – marriage, children, a mortgage – when you’re in your 30s; it can be easy to compare your situation with others.

The same goes for dating. Perhaps you have even found the right person for you and are wondering how long you should date before getting married?

You might feel you are rushing things by getting married after dating for only a few months, but if it feels right and fits with the timeline of your life, there is nothing to worry about.

Particularly if you are in your 30s and want to start a family, marriage unifies families – both in the spiritual and religious sense and also in terms of legality.

Wanting to settle down into a relationship and have children can be a huge motivator for wanting to get married, and it is increasingly more common for engagements to occur much sooner in your 30s than perhaps they would have in your 20s.

Ensuring that both you and your partner are ready to progress from dating to preparing for marriage is key to successful unions.

Some people may wish to take more time – a few years perhaps – to get to know someone fully before considering marriage.

Whilst for others, marriage is the next exciting step in their relationship, leaving time in the years spent as husband(s) and/or wife(wives) to explore the depths of a relationship more fully.

Any successful marriage is built on a network of love, care, and support for one another. A marriage requires each person to be fully committed and put the needs of their spouse above (or at least in line with) their own.

Regardless of how long a couple has been dating, if there is not that desire to put one another first, then entering into a marriage is not likely to be successful.

How Long Does The Average Couple Date Before Getting Engaged?

The average time spent dating is usually between 6 months and 5 years before getting engaged.

This wide time frame suggests that it really depends on the couple and their dating history.

When you’re in your 30s, external pressures can be a factor in wanting to become engaged and get married sooner.

Friends and family may unintentionally (or intentionally!) put the pressure on you by asking when you will get married sooner in your relationship than perhaps, they would if you were in your 20s.

This could be for a number of reasons, including wanting grandchildren and trusting that you know exactly what you want in a relationship.

In fact, there is a lot to be said for people dating in their 30s. It could be that you have come out of a relationship and are looking for someone new, or it could simply be that you have spent your 20s getting to know yourself better.

Understanding what you truly want for a relationship and not settling for anything less than what you deserve. A perfect romance!

Either way, it is likely that you will have a good understanding and a strong sense of self by the time you are in your 30s and therefore is likely to be able to have a better understanding of where relationships will progress to.

If you are in your 30s and have found the person of your dreams, there is no formal timeline to adhere to. If marriage is something that you both want – go for it! But if you want to take things at your own pace – that is also fine too!

Just because you’re in your 30s doesn’t mean that you have to stick to traditional dating etiquette!

Getting engaged is such an exciting time in life, and regardless of when it happens, in your 20s, 30s – whenever – just remember to take the time to enjoy this new chapter in your life.

When Should You Get Engaged?

Friends of mine often ask whether I was expecting my now fiancé to propose. The short answer is: yes. Yes, I was.

When it would happen, though, I did not know, and it was such an amazing surprise when it did!

Forgive me if I sound at all arrogant in my certainty that he would ask me to marry him. I say so with such assurance because we had discussed our hopes and dreams for the future – including marriage – many times before, and I knew it was something that was important to both of us.

When we get married, my future husband will be in his 30s. I asked him if he wishes he had proposed sooner, and his answer might surprise you.

A part of him wishes he had proposed sooner, a very small part, but only because he felt certain that we would be together forever.

And another part, a much larger part, might I add, feels calm and happy that we are getting married at the point in our relationship that feels right.

In reality – how long you date before getting engaged in your 30s is up to you.

Try not to be influenced by anyone else.

Try not to adhere to any societal pressures.

Nor try to live up to any expectations you set yourself when you were younger (which were most likely unrealistic and unlikely anyway).

Just enjoy the time with your partner.