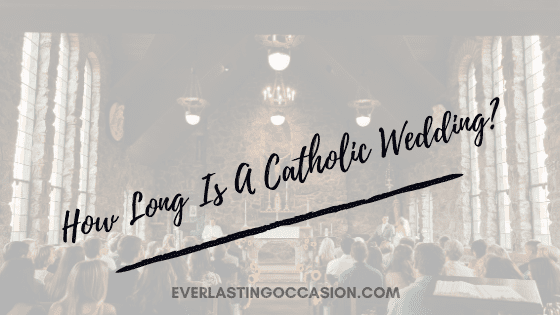 We’ve got a catholic wedding coming up. And I must admit, I was not sure how long we could expect the ceremony to last. At least until I researched into it. So If you are wondering the same, I suggest you stick around!

So, how long is a catholic wedding? A Catholic wedding will last between 30 minutes to 1 hour. The ceremony will last the full hour if it includes Mass and Communion, although will only typically last 30 minutes if only a Rite of Marriage is included.

In fact, they often must abide by a number of different rules and traditions set out by the church.

For instance, most catholic priests will not marry couples outside of a church.

Even then, permission may even be required if a couple wanted to marry in a different church from one locally.

And then there are the Matrimony requirements too.

This typically includes an interview with the priest or pastor, and they will often require proof of baptism, communion, and/or confirmation.

So, you can rest assured that a catholic wedding will follow certain customs.

Let us now take a closer look at what happens during a catholic marriage ceremony.

This way, if you are intending on being a guest at one, you’ll know exactly what to expect.

What Happens In A Catholic Marriage Ceremony?

What will happen during a catholic marriage ceremony will primarily depend on the type of ceremony being undertaken. There are two different versions; one with mass and one without.

From there the ceremony itself may vary somewhat depending on the couple getting married, their preferences, and also the requirements of the local church and priest.

For example, different churches and priests will have different customs and rules when it comes to readings and blessings.

Nevertheless, a catholic wedding ceremony will typically follow the structure outlined below:

The entrance rite is how the couple will look to take their place in the church.

Next, the ceremony will commence with an opening prayer by the priest.

The couple will be named and will ask for God’s blessings for their imminent marriage.

It is next that Mass (Nuptial Mass) will take place if:

During Mass, there will be several readings from both the Old and New Testament, along with a number of different hymns and psalms being read aloud.

Following this, the priest will provide a number of different biblical readings and teachings about marriage.

If the wedding couple is not to partake in the Mass service, they will instead have what is known as a ‘Celebration of Marriage’.

During this part of the ceremony, family and friends of the couple will read different biblical passages.

The priest will then provide a sermon about the teachings and insights of such passages.

This part of the ceremony is the exchanging of vows and the rings.

It is during the Rite of Marriage that the couple will read traditional Catholic vows, that are have typically been agreed with the priest prior to the ceremony.

It is unlikely that such vows will be personalized.

Following the “I Do’s” (hopefully!), the best man will give the brides ring to the priest.

He will bless the ring before presenting it to the groom to place on the brides fingers.

The Maid of Honor will then do the same thing, but for the grooms ring.

Again, the priest will bless the ring before returning to the bride to place it on the ring finger of the groom.

If the ceremony does not include mess, it will finish with some blessings and a final prayer given by the priest.

For weddings with a mass, then some further following traditions can be expected:

The priest will provide a final blessing to the married couple and guests, who will begin departing the church.

The full length of a Catholic ceremony is primarily defined by whether or not the couple are having a mass service or not.

Either way, this is not a particularly long ceremony:

It is certainly a ceremony of a lot of different traditions.

They are also highly organized, with most of the important elements being in place and agreed, well before the wedding day itself.

Other guides you may want to read: