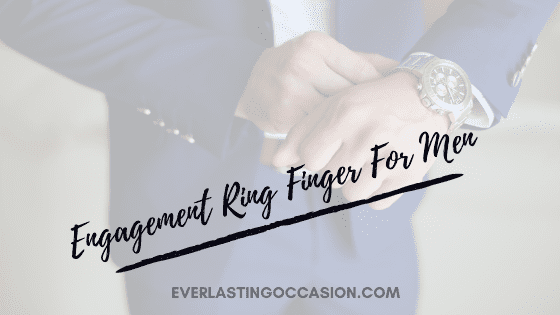 Engagement rings are becoming more and more popular among men. A progressive sign of the times and a great way to honor the commitment of marriage. But what finger should a man wear his engagement ring? Does this differ at all and are there any considerations to take into account? I spent some time researching to find out for good how is best to approach it.

Mangagement rings as they are otherwise known may not be for everyone and may not be an old-age tradition, but that shouldn’t stop anyone. Nor should it prevent them from being an option for every potential groom.

Let us now take a closer look at those commonly asked questions related to the topic; including where this ring can be worn before, during after and the ceremony and the different styles commonly found and available

Does The Male Wear An Engagement Ring?

For most of history, it has not been the tradition for men to wear engagement rings. That being said, there are some countries that are an exception as it is largely culture and religion specific.

For example, men have typically worn engagement rings in countries within both South America and Scandinavia

That being said, times have certainly changed.

In recent years, it has become more and more common for men to get and wear an engagement ring. Especially the case if a woman were to propose to a man (which is now more accepted than it once was).

Equally, a male engagement ring has become more commonplace since same-sex marriage was legalized in many countries.

In fact, male engagement rings has even become quite the trend with Ed Sheeran being perhaps the most notable celebrity to have one.

So much so that the market has started to respond. Many jewelers have since started to offer male engagement rings and this is of course, an avenue you could potentially pursue.

While it is certainly not required, it is the more modern, and fashionable, approach,

Why Do Guys Not Wear Engagement Rings?

Guys do not typically wear engagement rings due to historical and cultural influences.

For example, part of the older Ancient Romans customs (where most of the traditions we have to this day originated) was that the purpose of an engagement ring were one of ownership.

According to them, it was the mans responsibility to propose to a woman, and in doing so, he was claiming her for his own.

Beyond this, due to marketing campaigns of the 20th Century and other cultural influences, engagement rings had always been seen and considered feminine. It was what women wore.

It just wasn’t the thing to do for a man, and no man would have liked to have been seen wearing an engagement ring.

As previously mentioned, in recent years much has changed.

The world we now live in has evolved; we live in a much more inclusive society where equality is improved, and the associations of the engagement ring have started to change.

So guys that do not wear engagement rings are simply continuing with what proceeded them. Although they are in many ways, in a position to change this if desired.

Where Do Guys Wear Engagement Rings?

In the context where a man is to wear an engagement ring, where should it be placed? What hand and finger should it be worn?

Well, it all depends on context, along with regional ring wearing traditions.

Nevertheless, it typically always is placed on the fourth finger (from the thumb), but differs by hand.

Let us look at why hand below:

It is common for the engagement ring to be worn on the fourth finger on the left hand in the following countries:

However, in the following countries it is customary for the engagement ring to be worn on the fourth finger on the right hand:

However, there is another factor that can impact where the mangagement ring can be worn. And that is of course, during the wedding ceremony itself.

Here’s a quick overview of how to approach the engagement ring in relation to the service:

Immediately following the proposal, or following the engagement, the ring is to be placed on the fourth finger (same as the wedding ring).

The hand will be the one typical to the region.

So, for American and British men, it will be on the fourth finger on the left hand.

Although the engagement ring is usually defined to one finger and one hand, it does move temporarily during the ceremony.

Since the wedding ring is supposed to sit closer to the heart and not be taken off, it should ideally be the first ring on the fourth finger.

This means that it make sense to swap the engagement ring to the corresponding finger on the opposite hand just before the ceremony.

This way, the wedding ring can easily be placed on the right finger during the ceremony, without any issue.

Once the ceremony concluded, the engagement ring can then be placed over the wedding ring on either the left/right hand (depending on the countries tradition).

With all of this being said, as male engagement rings are not technically a tradition, they could be placed on a finger or hand of personal choosing.

It is ultimately up to the groom.

What Kind Of Engagement Rings Are Available To Men?

Male engagement rings are very different to those commonly desired and purchased for women. They are generally a lot more subtle.

However, since they have become more popular, jewelers have been offering more options that was once previously available.

Before, the only real option was a ring that looked somewhat like a wedding band.

Yet today, many jewelers offer engagement rings that are a little more distinctive.

You can typically find them with a silver, gold or platinum band; and they can come either solid or with a/some gemstone settings.

For the most part, male engagement rings are not as flamboyant, but there is still quite a lot to choose from.

A common choice among many men are titanium rings; due to the fact that they combine both a modern aesthetic while also being relatively distinct.

Most jewelers who sell male engagement rings will also offer those that are appropriate for more strenuous activities; or jobs that require physical labor. This therefore helps to protect them from accidental damage and breakage.

Just like you see for women, there are male engagement rings that come in different colors, contrasts and even different finishes (such as polished and matt).

Nevertheless, a simple band may be all that is desired.

It all comes down to preferences, budget and what is available to you at time of purchase.

Male engagement rings are quite the statement; and a fantastic way for both individuals in the couple to commit and celebrate their love for one another with a timeless sentimental piece.

Whether you decide to wear it on your fourth finger on your left hand, like tradition states for women, or you opt for something new altogether, the choice is ultimately that of the ring wearer.

With a lack of male-specific engagement ring traditions and historical meaning, now is the time to make it your own. You have the flexibility, and ability to enjoy it however you feel is right and necessary.

Just be sure to consider the ceremony, the wedding band, and the various different styles and options that are available and open to you.

As with any expensive purchase in life, it also comes strongly recommended that you plan ahead.

Do your research, due diligence and thoroughly review the market. It goes without saying that you should only purchase from a recommended and trustworthy jeweler.