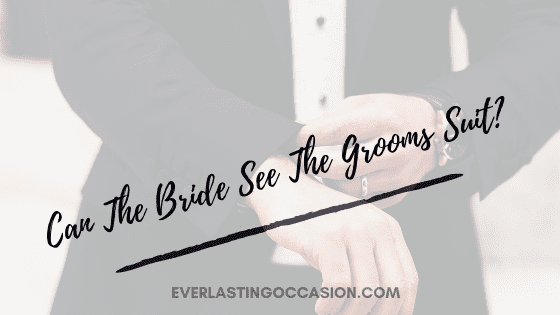 There is a lot of debate and superstition around whether the groom can see the bride’s dress before the wedding. But what about the other way around? Here is what you need to know.

So, can the bride see the grooms suit? The bride can see the groom’s suit before the wedding if desired by both the bride and the groom. While no etiquette or superstition suggests its bad luck, it may take away any surprise desired from either party on the wedding day.

I actually conducted a survey to see what is common among couples.

I wanted to find out how many brides do end up seeing the groom’s suit. The results were surprising:

But I wanted to dig a bit further, and here are the results from the second survey on the same 32 brides.

Almost every bride attended a fitting of some kind or other. This included both the original visit and any subsequent appointments.

And the vast majority actually chose the suit outright.

Then, 1 in 4 brides surveys needed to intervene on the suit choice.

That included both suggesting a different style and/or colors.

That’s relatively high and perhaps food for thought if you are a bride and unsure whether to attend.

Thankfully less than 10% of couples argued throughout the entire process.

Nevertheless, communication appears to be critical here as with anything wedding-related.

So, be sure to have the conversation early with your partner.

Find out each other’s preferences and also consider personalities and general patterns.

From the survey, it looks like a lot of the grooms wanted their bride to attend. Or at least let them!

The truth is, survey aside, whether or not the bride gets to see the suit, or visits any fittings, is at the discretion of the couples.

Why Would The Bride Want To See The Grooms Suit?

There are several different reasons why a bride would want to see a groom’s suit before the big day.

While a reputable tailor will know how to measure and recommend a good-fitting suit, not all grooms may consult a tailor during the selection process.

Simultaneously, as the bride, you may have your ideas or preferences for how you want the suit to fit.

Attire Aligns With The Wedding Theme

For some grooms, this may not be an issue.

But for others, they may not be so heavily involved with the intricacies of wedding colors, matching them, and so on.

This is something that the bride is typically very clued up on.

So, a bride attending the suit selection and/or fitting can point out what colors are necessary for the suit and accompanying accessories.

Attire Matches With The Rest Of The Bridal Party

Following on, the suit should be in unison with the rest of the bridal party, such as the bridesmaids.

The suit should work synergistically with the bridesmaid’s dresses and the rest of the groomsmen.

The groom does not want to stand out for all the wrong reasons.

Thus, the bride attending such fittings can provide insight here when and where required.

Want To Be Told

Some grooms just want to be told what to wear.

That’s just how it is for some men.

Of course, it depends on personality types, but some would rather not decide.

Especially if they are not quite sure, or active in the general wedding planning process.

Brides often plan and dream of their wedding day for their entire lives, and she will likely have some idea of what she wants her husband-to-be to look like.

By attending, she can put forward her opinions which may very well even be highly sought out from the groom (as is a case in point above).

No Shocks or Surprises

No bride wants to be embarrassed, shocked, or upset with their husband on their wedding day.

But it can happen.

If left to their own devices, the groom may opt for something that the bride did not have in mind.

Is It Bad Luck For The Bride To See The Grooms Suit?

It is not generally considered bad luck for the bride to see the groom’s suit. While there is some superstition around the dress, there does not appear to be any regarding the suit.

The only way it could be considered ‘bad luck’, is if the bride was not supposed to see the suit before the wedding day, and did so by accident.

In that respect, it could be bad luck on the groom’s part, who may have wanted to provide his own surprise on the wedding day.

Generally, this is not usually the case.

But to avoid this from happening, if a bride or groom did not want to see the suit before the wedding day, it’s critical to be careful with where the suit is stored or kept.

Does The Bride Choose The Grooms Suit?

Whether or not the bride chooses the groom’s suit will depend on the couple and the circumstances. Some brides do end up doing so, whereas others play a more supportive role in the selection process.

It ultimately depends on many factors, starting with whether the bride is even in attendance, to begin with.

The preferences of the bride and groom, personalities, availability, and budget are all other aspects that can play their part, too.

There are also some other possibilities here:

Either way, the process should be fun and productive.

How Do You Pick A Suit For A Groom?

The groom’s suit should be chosen with consideration of the season, wedding time, personal style, general wedding theme, formality, venue, and the rest of the bridal party.

It is due to these different reasons that wedding attire can differ quite dramatically.

There is also the consideration of whether the suit will be purchased or rent, which will mostly come down to what is available and financial circumstances.

Classical and contemporary suits are best, and blue, black, and grey colors are the most commonly worn by grooms.

However, there will always be some variation between grooms based on the factors outlined above.

What is most important is that the suit fits right.

Who Buys The Grooms Suit?

The groom’s suit is traditionally purchased by the groom or his immediate family. Although in more recent years, this cost has come from the overall and general wedding budget that may be split with the bride.

It is also traditional for the groom or groom’s family to pay for the best man’s, groomsmen’s, and usher’s suits.

It is a nice gesture if he or the family can afford to do so.

This cost tends to be picked up by the best man, groomsmen, or ushers themselves in more recent times.

Another more affordable approach is if suits are rented.

But who pays for the rental will follow in the same way.

The bride can certainly see the groom’s suit before the wedding day if both of them want this to be the case, of course.

The majority of brides do end up seeing the suit at some point.

The majority of brides are actually very involved with the process.

But that does not mean you have to follow suit (see what I did there).

In reality, just like most aspects of a wedding, it comes down to personal preferences.

Nobody should tell you exactly what to do; you should be making decisions that work for you both.

So, make the decision at your discretion.

Just be sure to communicate early on.

But you know that already.