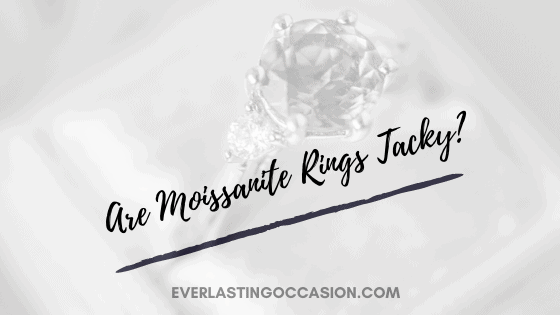 So, are moissanite rings tacky? Moissanite rings are neither fake nor tacky. However, some women may look down on them because they are lab-made gems designed to look like diamonds but shine brighter. Nevertheless, Moissanite is a durable and beautiful-looking gem that closely resembles the famous white gemstone but has its own set of characteristics.

In all honesty, it’s actually quite challenging for the average person to tell the difference between diamond and Moissanite.

Unless you know what you are looking for.

And at least visually.

But we all have our budgets, our preferences, and opinions.

Neither is better than the other.

Not to mention that diamonds have their prices artificially inflated anyway.

So what you decide to have really should not matter. At least to other people.

Nonetheless, let’s talk about all the ways a moissanite ring is awesome and how it does compare to a diamond.

Is It Tacky to Get a Moissanite Ring?

Simply put, no it is not tacky to get a moissanite ring. All judgments aside, it is tackier for anyone to judge someone else’s ring.

The moissanite gem came from a crater that fell to earth during a meteor shower in 1893.

Natural Moissanite is incredibly rare, but laboratories were able to recreate the exact same gemstone.

This is where people may find the ring tacky, but in reality, you are getting a beautiful real gemstone that is the second most durable available behind the diamond.

The bonus you save lots of money which you can get put towards a bigger and better wedding or even a honeymoon.

Let’s talk about what they look like and all their properties.

Moissanite looks a little different than a diamond. Fake is not the right term. Some people have deemed Moissanite to look like a knock-off diamond or a cheap version of one. Still, in reality, its refractive properties outshine a diamond.

Literally, the refractive index of a moissanite gemstone is quite a bit higher than a diamond, meaning that its brilliance and fire also rates higher.

This is what makes it hard to understand whether it is a diamond or it is a moissanite gem.

Their colors that reflect off the gem, however are different.

Moissanite gives off a rainbow glare, while the diamond strictly gives off a white or bright light.

There are specific cuts that professional jewelers suggest if you are trying to make a moissanite pass for a diamond.

Round is said to be the cut that most represents a diamond.

Can You Tell Moissanite From A Diamond?

A professional jeweler would be able to tell the difference between a diamond and a moissanite ring. Your friends, unless they really nitpick, shouldn’t be able to tell so easily.

This is especially true with technological advancement.

The only arguable point is that it may be easier to tell which is which when the moissanite ring is larger.

Having said that, there are several characteristics that separate the two.

Here is what differences you can expect from a moissanite ring and a diamond ring.

One of the main differences between the two gemstones is the refractive qualities and brilliance.

Moissanite actually rates higher despite having a stigma attached to the way it shines and sparkles.

Here is the difference between the two.

These three ways give a diamond its unique look when light hits it. This may be the easiest way to tell a moissanite gemstone from a diamond.

Because this gem is much more refractive than a diamond, some people complain it can be tacky because it gives off a very disco ball sort of light.

The light that is reflected off the gemstone is not a bright white like the diamond but instead an array of rainbow colors.

This is favored by some because of how sparkly and shiny it is.

The reason that diamond is a girl’s best friend isn’t because of how pretty it is.

It is because it is a tough cookie to break.

But not really, diamonds and Moissanite are some of the toughest gems around, which make them both great candidates for a ring.

The last thing anyone wants is their ring to chip, break, or fall off. Now that’s a cheap gem.

There is no gemstone that rates higher on the Moh scale of hardness than a diamond.

The diamond is a perfect 10 and is a real high-quality gemstone.

Overall the diamond is a rock that is harder in almost every category than Moissanite except for one.

Moissanite rates high on the Moh scale as well, coming in at a 9.25.

This surpasses many of the other options one would have for a choice of gemstone.

Where it beats out the diamond is heat resilience.

Other than that, the diamond and Moissanite both perform very well in everyday wear.

You would need to really rough house the gem around to get it to crack or break on you.

Who doesn’t want to put a couple more thousand dollars into your honeymoon?

Saving money is a big difference between the two rings but not something that you can see.

It’s a little secret (diamond in the ruff, if you will) that we like to keep to ourselves. Diamonds are naturally much more expensive.

Diamonds are much more expensive not because they necessarily sell a higher quality gemstone but instead they are less available on the market.

It is solely a story of supply and demand.

Having said that it can also fluctuate quite a bit depending on the rock size you’re getting.

A comparable gem size for Moissanite may cost you no more than $500.

Yup, nearly a sixth or more of the cost that your fiance would need to pay for a diamond.

It really makes people start to question what choice of gemstone they should pursue.

Again it has nothing to do with quality and more about market availability.

Can I Pass Off My Moissanite As A Diamond?

It is possible to pass off your Moissanite ring as a diamond – at least to the general public. To professional jewelers and those familiar with gemstones, it is unlikely.

You are not sold.

A diamond really is a girl’s best friend, and it’s OK.

But if you are curious as to whether or not you can pass off your moissanite gemstone as a diamond. Read on.

Because yes girl, you can.

And there are some things you can do to make it easier to do so:

Do The Round Cut

Wait does this sound like the characters from that show on Nick Jr. Yup!

If you want to pass off the Moissanite for a diamond then you need to consider its shimmer, sparkle, and shine.

This is the easiest way for someone to tell that you have a moissanite gem rather than a diamond.

The best way to resemble a diamond is to go with a round cut.

The way the reflective properties work most emulates a diamond in this type of cut.

Medium Size Is The Way To Go

The larger the gem is, the easiest it is to tell because of the brilliance and the coloring.

While diamonds are technically meant to be colorless like a moissanite ring is, they are actually said to have faint bits of brown, yellow, or white in them.

The smaller the moissanite size, the harder it is to tell if it is a diamond or not.

Having said that, technology has made moissanite gemstones resemble diamonds so closely that even then, you can’t tell.

It would take some thorough examination and thought to really distinguish the two.

Go With What Makes You Happy

Moissanite is not necessarily the better choice over a diamond.

It is vital that no matter what you decide, you go with something that financially makes sense and makes you happy.

You are, in fact, going to be wearing this piece of jewelry for the rest of your life.

So if it is worth it to you and your fiance to go a few thousand in, then go for it!

But the original question and stigma are always wondering if Moissanite is tacky.

Again the only thing that is truly tacky is someone judging your ring.

The ring is meant to be a symbol of eternal love, and as some hopeless romantics put it, it could be a piece of string, and it wouldn’t matter.

There are certainly benefits to both, but the age-old taboo rumor that Moissanite is fake and cheap simply is not true.

Plus, it’s scratch-resistant and does not go cloudy either!